Cracking the code of a deadly virus 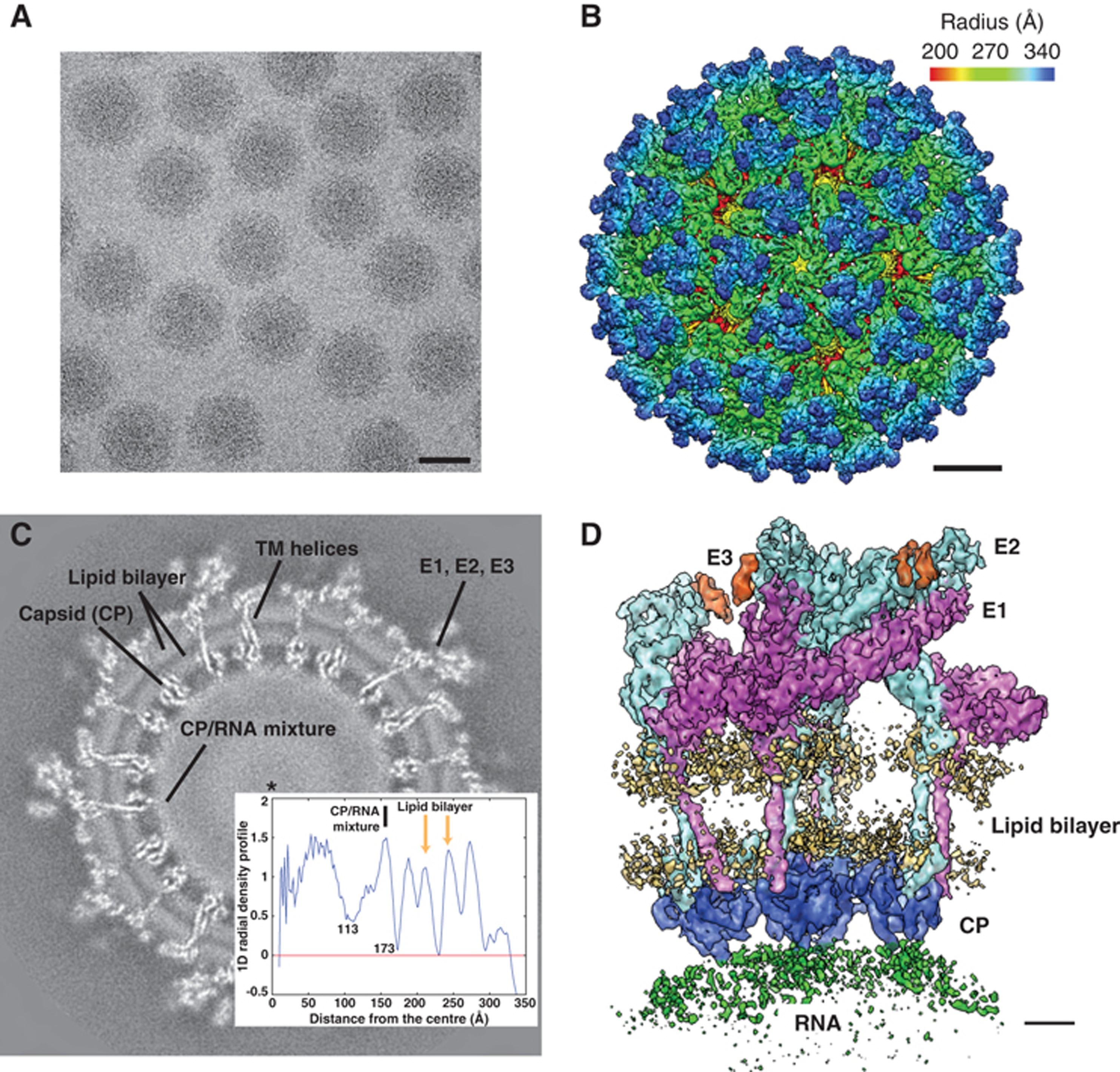 3D reconstruction of VEEV. (A) A typical CCD image of VEEV TC-83 strain embedded in vitreous ice. Scale bar: 50 nm. (B) Radially coloured 3D reconstruction of VEEV, showing the E1 basal triangle (green) and E2 central protrusion (blue) for each spike. Scale bar: 10 nm. (C) A slice through the 3D density map 20 pixels from the origin. The insert is the 1D radial density profile of the map and is aligned to the slice image. (D) One asymmetric unit of the virus containing four unique copies of E1 (magenta), E2 (cyan), E3 (orange) and CP (blue). The cryo-EM densities for the viral membrane (yellow) and genomic RNA (green) are also displayed at slightly lower isosurface threshold. Scale bar: 2 nm.

Venezuelan equine encephalitis virus (VEEV) is an unforgiving killer of horses, donkeys and zebras, resulting in mortality as high as 80 percent of infected animals. It causes rapid, catastrophic swelling of the brain and spinal cord, leading to severe neurological symptoms and — in many cases — sudden death. The virus can also infect humans, with similar results. The U.S. and Soviet Union both weaponized VEEV during the Cold War, prompting the Centers for Disease Control and the National Institutes of Health to classify VEEV as a category B pathogen.

A research team led by the University of Maryland has exploited a weakness in VEEV’s genetic code, resulting in a far less deadly mutant version of the virus when tested in laboratory mice. The new discovery could enable the development of a vaccine and other drugs to combat VEEV. The findings were published online November 16, 2016 in the Journal of Virology.

Like many other dangerous viruses, VEEV has RNA as its genetic material instead of DNA. Because a similar weakness exists in RNA viruses that pose serious health risks to humans — such as HIV, Zika, chikungunya and others — the discovery could advance the development of treatments for these viruses as well.

“RNA viruses tend to cause acute infections,” said Jonathan Dinman, professor and Chair of the UMD Department of Cell Biology and Molecular Genetics, who is the senior author on the research paper. “You either fight them off quickly, like the common cold, or they overwhelm you, like Ebola.”
Dinman and his colleagues exploited a mechanism known as programmed ribosomal frameshifting (PRF), which allows RNA viruses to pack a larger amount of genetic information into a relatively short sequence of RNA. By prompting an infected cell to read the same sequence of RNA in two different phases, PRF allows a virus to create two different proteins instead of one.

The researchers created a mutant version of VEEV with a disrupted PRF mechanism, which impaired the virus’ ability to create a second protein from a specific section of RNA. Tests in cultured cells did not reveal a large difference in the rate of virus production. But when the researchers tested the mutant virus in laboratory mice, they saw a dramatic increase in the rate at which infected mice survived the disease.

“With some simple mutations, we compromised VEEV’s ability to be a virulent virus,” said Joe Kendra, a biological sciences graduate student at UMD and the lead author of the study. “This result shows that PRF might be a therapeutic target for other viruses. If we can confirm that the mutant virus confers immunity, opening the door to a vaccine, that will be very exciting.”

In addition to a higher survival rate of mice infected with mutant VEEV, the researchers also noted a lower incidence of the virus accumulating in brain tissues. Dinman, Kendra and their co-authors suspect that the missing protein in the mutant virus plays a role in the virus’ ability to cross the blood-brain barrier — an essential step to cause brain swelling.

“It’s interesting that the virus uses PRF to survive, but we can also manipulate that mechanism to work against it,” said study co-author Yousuf Khan, an undergraduate biological sciences major and Goldwater Scholar at UMD. “This is a new way to target viruses and make vaccines. It opens up a lot of new research questions.”

According to Dinman, the finding is particularly encouraging in light of the challenge posed by climate change, as viral diseases begin to extend their range north beyond the tropics.

“So many of these diseases are borne by mosquitoes. Chikungunya is now established in the Caribbean, and Zika has been found in two counties in Florida,” Dinman said. “These viruses are on our doorstep. But these results give us hope. Developing a vaccine takes a long time, but with a concerted effort across government and academic labs, we have a good chance.”

Beyond Ebola: The virus hunters