How viruses infect bacteria: A tale of a tail 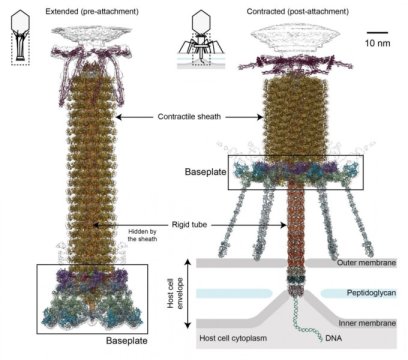 The tail of bacteriophage T4 is shown before (left) and after (right) binding to a host cell. Upon attachment to the bacterium, the bacteriophage pierces the host cell envelope and injects its genomic material into this cell, ensuring novel bacteriophages can be produced. Each protein is labeled with a unique color. The model contains more than 1.3 million atoms (not counting hydrogens). The structure and transformation of the baseplate (black rectangle) has been described in atomic detail.

Bacteriophages are viruses that infect bacteria. Using state-of-the-art tools, EPFL scientists have described a million-atom “tail” that bacteriophages use to breach bacterial surfaces. The breakthrough has major implications for science and medicine, as bacteriophages are widely used in research.
To infect bacteria, most bacteriophages employ a ‘tail’ that stabs and pierces the bacterium’s membrane to allow the virus’s genetic material to pass through. The most sophisticated tails consist of a contractile sheath surrounding a tube akin to a stretched coil spring at the nanoscale. When the virus attaches to the bacterial surface, the sheath contracts and drives the tube through it. All this is controlled by a million-atom baseplate structure at the end of the tail. EPFL scientists have now shown, in atomic detail, how the baseplate coordinates the virus’s attachment to a bacterium with the contraction of the tail’s sheath. The breakthrough has made the cover ofNature, and has important implications for science and medicine.

Phages are widely distributed on the planet. They accompany bacteria everywhere — in the soil, water, hot springs, algal bloom, animal intestines etc — and have a dramatic impact on the diversity of bacterial populations, including for example, the microbiome of the human gut. Phages are also indispensible tools in genetics and molecular biology, and are even being developed as an alternative to antibiotics. However, the mechanisms by which these viruses attach to their host cells and deliver their genetic material remain poorly understood.

The laboratory of Petr Leiman at EPFL has now created a detailed, atom-level model of the transformation of a phage’s baseplate, an important structure that controls the phage’s ability to find its target bacterium and attach to it, contract its tail, and inject its DNA. The entire baseplate-tail-tube complex consists of one million atoms, making up 145 chains of 15 different proteins, most of which had to be modeled from scratch. To do this, Leiman’s lab used the state-of-the-art equipment of the Center for Cellular Imaging and NanoAnalytics (C-CINA) at the University of Basel and the computing resources of EPFL’s High Performance Computing department.

The scientists were also able to identify a minimal set of molecular components in the baseplate that work together like miniature gears to control the activity of the virus’s tail. These components, and the underlying functional mechanism, are the same across many viruses and even bacteria that use similar tail-like structures to inject toxins into neighboring cells.

“These findings are important for our understanding of how these contractile tail-like systems work,” says Leiman. “But they also set a benchmark for the complexity of biological systems that can be described at the atomic level.” The human body contains almost as many bacteria as human cells (30-40 trillion), and the human gut microbiota will likely represent an important target for personalized medicine in the future. “It is clear that we need to understand the detailed mechanisms by which these bacteria interact with each other and how phages are involved in these interactions.”