Trick of the light may help diseased plants attract greenfly 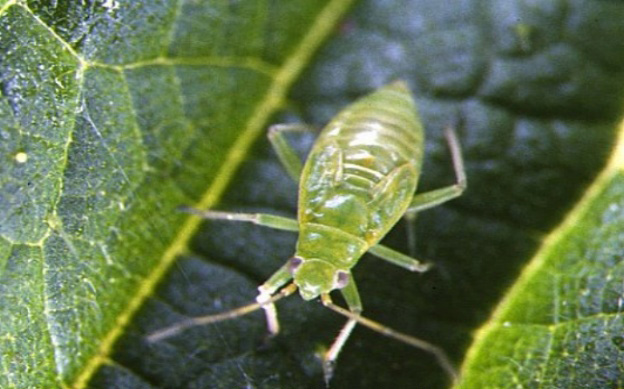 The leaves of virus-infected plants reflect light differently to attract the attention of disease-spreading greenfly, new research suggests. Scientists from the University of Bristol have shown for the first time that plant viruses alter the surface of leaves, influencing how light is polarized and helping insects to potentially ‘see’ infected plants.

The majority of vector-transmitted plant viruses are spread between host plants by insects, in particular by sap-sucking aphids — more commonly known as greenfly — which are thought to be sensitive to polarization patterns.

The research, published in the journal PLOS ONE and funded by the EU and the Natural Environment Research Council (NERC), could open up a new field of research as plant scientists hope to solve some of the major threats to global food security.

Professor Gary Foster, from the School of Biological Sciences at the University of Bristol, said: “Transmission of plant viruses by insects is of huge importance to agriculture and the environment. Much of the historical work carried out has been within the visible wavelengths of light.

“However, we know insects can see polarized light regions, and this research does in fact show that plant virus infection can affect the percentage of polarization of light reflected from leaves — meaning bugs such as greenfly have the potential to ‘see’ which plants are infected.

“This is an important breakthrough as plant pathogens can play a large part in reducing crop yields, so understanding how viruses are spread means we’re better placed to try and tackle the problem.”

Previous studies have shown that plant viruses can specifically change the smell of plants upon infection, through modified olfactory signals, but little work has been carried out on how an aphid may see an infected plant or how a plant virus might alter the leaf surface to bring this about.

A series of photographs taken using a polarizing filter revealed that infected leaves were ‘significantly’ less polarizing than healthy leaves. This is due to the properties of the waxy outermost layer of the leaf cuticle, which can change how light is reflected.

Indeed, in plants infected with aphid-vectored viruses, there were different changes in the gene expression patterns of these wax genes compared with viruses which aren’t transmitted by insects.