A new cell receptor for rhinovirus 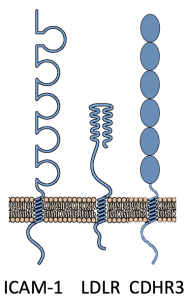 Rhinovirus is the most frequent cause of the common cold, and the virus itself is quite common: there are over 160 types, classified into 3 species. The cell receptor has just been identified for the rhinovirus C species, which can cause more severe illness than members of the A or B species: it is cadherin-related family member 3.

Because viruses are obligate intracellular parasites, the genome must enter a cell before new particles can be made. The first step in this process is binding of the virus particle to a receptor on the plasma membrane. Two different membrane proteins serve as receptors for members of rhinovirus A and B species: intracellular adhesion molecule 1, and low-density lipoprotein receptor (illustrated).

It has not been possible to propagate species C rhinoviruses in conventional cell cultures, which has hampered research on how the virus replicates. The lack of a cell culture system required a different approach to identifying a cell receptor for this virus. It was known that the virus replicates in primary organ or cell cultures derived from sinus tissue, but not in a variety of epithelial and transformed cell lines (e.g. HeLa cells). In silico comparison of gene expression profiles revealed 400 genes that are preferentially expressed in virus-susceptible cells. This list was narrowed down to 12 genes that encode plasma membrane proteins. A subset of these genes were introduced into cells and tested for the ability to serve as a rhinovirus C receptor. Introduction of the gene encoding cadherin-related family member 3 (CDHR3) into HeLa cells allowed rhinovirus C binding and infection.

The cadherin family comprises cell surface proteins that are involved in cell-cell communication. The exact cell function of CDHR3 is not known, but the protein is found in human lung, bronchial epithelium, and cultured airway epithelial cells. A mutation in the gene encoding this protein is associated with wheezing illness and asthma in children. This mutation, which causes a change from cysteine to tyrosine at amino acid 529, was found to increase virus binding and virus replication in HeLa cells that synthesize CDHR3. It will be important to determine if this amino acid change increases rhinovirus C replication in humans, thereby leading to more serious respiratory illness.

The CDHR3 gene was used to establish a stable HeLa cell line that produces the receptor and which can be infected with species C rhinoviruses. This cell line will be useful for illuminating the details of viral replication in cells, which has so far been elusive due to lack of a susceptible and permissive cell line. It may also be possible to produce transgenic mice with the human CDHR3 gene, which could serve as a model for studying rhinovirus C pathogenesis. Transgenic mice that produce the receptor for the related polioviruses, CD155, are a model for poliomyelitis.

Viruses as Modulators of Mitochondrial Functions