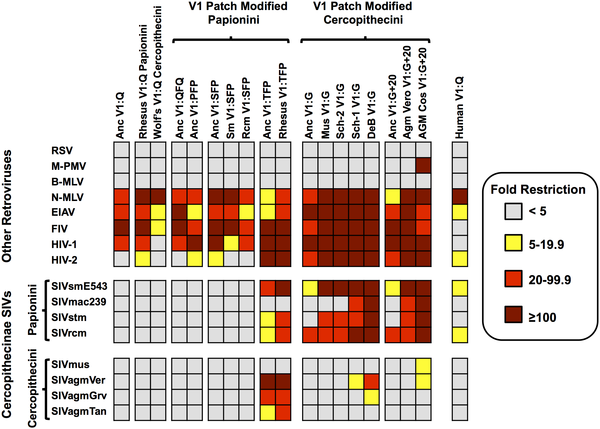 The widespread distribution of lentiviruses among African primates, and the lack of severe pathogenesis in many of these natural reservoirs, are taken as evidence for long-term coevolution between the simian immunodeficiency viruses (SIVs) and their primate hosts. Evidence for positive selection acting on antiviral restriction factors is consistent with virus-host interactions spanning millions of years of primate evolution. However, many restriction mechanisms are not virus-specific, and selection cannot be unambiguously attributed to any one type of virus.We hypothesized that the restriction factor TRIM5, because of its unique specificity for retrovirus capsids, should accumulate adaptive changes in a virusspecific fashion, and therefore, that phylogenetic reconstruction of TRIM5 evolution in African primates should reveal selection by lentiviruses closely related to modern SIVs. We analyzed complete TRIM5 coding sequences of 22 Old World primates and identified a tightly-spaced cluster of branch-specific adaptions appearing in the Cercopithecinae lineage after divergence from the Colobinae around 16 million years ago.

Functional assays of both extant TRIM5 orthologs and reconstructed ancestral TRIM5 proteins revealed that this cluster of adaptations in TRIM5 specifically resulted in the ability to restrict Cercopithecine lentiviruses, but had no effect (positive or negative) on restriction of other retroviruses, including lentiviruses of non-Cercopithecine primates. The correlation between lineagespecific adaptations and ability to restrict viruses endemic to the same hosts supports the hypothesis that lentiviruses closely related to modern SIVs were present in Africa and infecting the ancestors of Cercopithecine primates as far back as 16 million years ago, and provides insight into the evolution of TRIM5 specificity.

Full text can be downloaded by the clicking on the title: